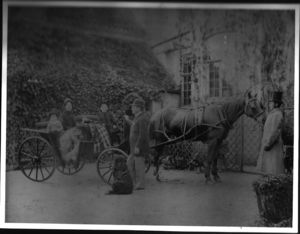 The Lodge with original owners

In 1880, records show that Mr. Richard Sidney Smith was the owner of The Lodge. He was a steam and water engineer, owning, as well as The Lodge, both Mills in the village, together with the bakery business carried on at the Mill on the main road. As well as having eleven children – eight by his first wife and three by his second, he found time to be Church Warden! 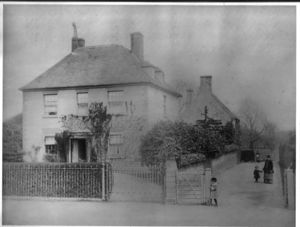 Mrs. Douty bought it in 1912, and while the Manor was being repaired after the fire, moved into The Lodge with her new husband until the work was finished. Her servants, of course, also moved in! One of the good things she did in this village was to bring young brides in, to work as housemaids! One was pretty Maggie who came as under-parlourmaid, fell in love with Fred Batsford who lived in Duck Lane with his parents, and married. That story, unfortunately wasn’t the traditional fairy story where everyone lived happily ever after. Maggie died from appendicitis a few years after their marriage, leaving Fred with two little girls.

Then there was Alice, who came to work with her sister in the kitchen. Alice fell in love and married another local lad, Cyril Green. Kate Olive who also worked for Mrs. Rees-Mogg married Frank Bailey, and Betty Spencer married one of Col. Rees-Mogg’s grooms, Percy Salmon!

The servants at The Lodge while Col.and Mrs Rees-Mogg resided there, consisted of a parlour maid, an under-parlour maid, a head housemaid, an under-housemaid, a cook and a kitchen maid. The worst job of all was first thing in the morning, 6.00am, when the grates had to be cleaned out, scrubbed with emery paper, polished with black lead, and fires laid ready for the parlour maid to light when needed.

The housemaids were dressed in print with big aprons for their morning jobs, but in the afternoon, they always had to change to black dresses with spotless white frilly aprons. The parlour maid was, of course, the smartest, with streamers flying from her white cap. She was responsible, among other things, for washing the silver and glasses in the pantry, while the china was splashed around in the enormous kitchen sink by the kitchen maid. Diggie Salmon was in charge of the garden and stoking the boiler down in the cellar, which was connected to massive pipes.

When the Rees-Moggs moved from The Lodge back into The Manor taking all their staff with them, except the gardener, Miss Weldon took over the occupancy with only Eliza the cook, and a housemaid to keep the house in trim. I’m not quite sure what or who Miss Weldon was in relation to Mrs. Rees-Mogg, but if she was her secretary as I’ve been told, it was certainly a ‘wow’ of a job – with an enormous house thrown in. 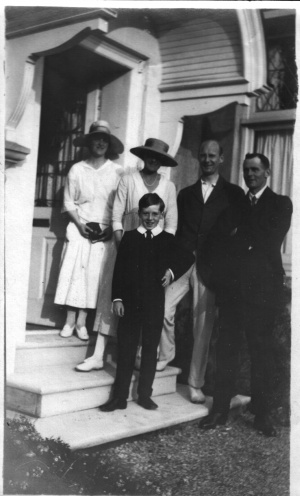 Miss Weldon had a very upright bearing. She was a sociable and very charming Irish lady. She was also very forgetful, inviting guests one day, and then being taken completely by surprise when they turned up on the planned day! She started a Boy Scout Troop and a Girl Guide Company in the village. The latter seemed to have faded out after a few years. Maybe it was because their uniforms were made from thick navy serge – very hot and itchy, so I am told. These were made for them by Mrs. Harry Lively. Miss Weldon’s efforts with the Boy Scouts was very successful, for she managed to organise a trip for some of her scouts to go to a Jamboree abroad between the two World Wars! To raise money for this, she organised a concert in which her scouts took part, dressed as tin soldiers.

The Boy Scouts Jamboree in Budapest 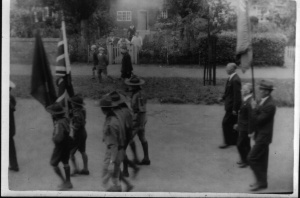 The Jamboree took place in 1933 near Budapest. The Clifford Scouts had already been to one Jamboree in the 1920’s/30’s, at Arrow Park, Birkenhead and watched their founder, Lord Baden-Powell plant some trees to commemorate the camp. Five scouts were allocated from the Troup to attend the Budapest Jamboree – Tom Radbourne, Stan Hastie, George Pittaway, Len Silvester and Jack Huckvale.

Len wrote an article about it in the Parish Magazine on their return. In it, he mentions breakfasting at Cologne where breakfast was supplied by troops of uniformed Nazi Youths who, he said, gave then a tremendous reception. In Budapest they went bathing in the Artificial Wave Baths (and I thought they were a new invention!) Lord Baden-Powell watched the five Clifford scouts doing some washing on one of his tours round the camp site. They were also inspected by the Regent of Hungary, and won an Hungarian Flag for the best patrol in their contingent!

Tom Radbourne, a year later, received a Certificate issued by the Boy Scouts Association. This beautifully designed Certificate showed, as well as the Colours and Union Jack, a Boy Scout rescuing a lady in a trap, by attempting to pull back her runaway horse, and succeeding; bringing the runaway horse to a standstill. Another Boy Scout is bringing a child out of a burning house and another is rescuing someone from drowning. It was the latter happening that caused Tom Radbourne to receive this Certificate.

Miss Weldon also encouraged the Annual Horticultural show to take place in The Lodge garden. Unfortunately she quarrelled with Col. Rees-Mogg (rumour has it she was known as Col, Rees Mogg's Fancy Woman – though rumour also had it a few years before then, that Gilbert Douty was getting a little too friendly with Miss Weldon!) and was given a week’s Notice to Quit. It was 1940! When she left, Mrs. Rees-Mogg arranged for the house to be used for evacuees. After the evacuees, came the Pioneer Corps, then the Womens’ Land Army.

In 1944, The Lodge was taken over by the .Y.M.C.A. to house farming students. These boys were taken around to various farms to gain experience in farming. Two couples looked after them and lived with them in The Lodge. One couple was a Mr. & Mrs. Charlesworth, the latter a keen footballer, who joined the Clifford Football Team.

This Mr. Charlesworth though, was a cross-patch - according to the boys there, as he refused to let them go swimming in the river. They went anyway, through the field The horses there gave them an idea of how to play a trick on the warden. They coaxed and pulled a horse up to the Lodge and up the steps of the Lodge, and shut it in the Warden's study. It took three hours for the Warden to coax it out!. 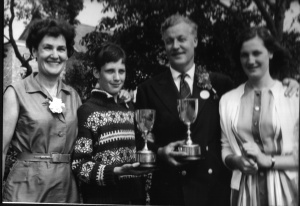 The Lodge was not taken at the auction of 1959 – and when I found out what condition The Lodge was in at that time, I am not surprised. However Dr Byron Bramwell, working in Leamington Spa, was appointed Medical Officer of Health for Stratford and South Warwickshire, and needed a house nearer to his work. Among the various properties they looked at was - The Lodge, still waiting to be sold.

They first thought of pulling The Lodge down and rebuilding, for the building was in a terrible state. On the top floor, a hole had been knocked in the wall, to get from one bedroom to another. Most of the stair bannisters were missing (maybe for firewood!). Plaster had come off the wall of the stairs, revealing rather interesting lathe and plaster construction.

Central heating was from a boiler in the cellar which, they found out later, ate coal/coke. There were no radiators, but hot air came up through grids on the ground floor. The original water supply had been from a well which the servants had to pump up to large tanks on the terrace above the bathrooms. It is possible that Mrs. Rees-Mogg arranged the water supply for the houses in the village who did not have their own wells.

In spite of the state of the house, they bought it at a price of about £3,500, but at that time, only £500 was allowed for spending at any one time on renovations, before applying for fresh planning permission. They were eventually able to move in in 1953. Their eldest daughter Gail was 10. Sandy their next daughter was 7 and their son Roderick was 5. Before long, Roddy found the junk room built on the front west of the house, an ideal place for his model railway. He also sometime during his youth, heard of a tradition (from the village children) that there was a dead policeman in the cellar, and he thought up a good way for acquiring extra pocket money was to ask them for payment of one penny for him to look for this corpse on their behalf. .

There were two wings at the back of the main building; one housed the enormous original kitchen with servants rooms over. The Bramwells did pull this down!. The other wing they made into a separate dwelling as a flat for a couple who had lived in a flat in their Leamington home, Mr. Ken and Jean white. Ken was an architect and he was helpful in redesigning The Lodge for them.

There were old urinals on the north terrace, and they were removed, and a cloakroom put behind the new kitchen in which they put a new oil boiler.

The windows on the east side of the house had been bricked up – possibly from the days of window tax, and there was a conservatory there.

Eventually the flat became the home of Dr. Bramwell's mother until her death. Miss Win Baker and her elderly father had arrived in the village at the time of her death looking for somewhere to live in order to take on the role of Headmistress at the village school. They lived in that flat until No. 34 came up for sale.

The Bramwell family soon were very involved in village life. Flower Shows were encouraged to start in their garden, though there was one year when on the day of the Flower Show, it poured with rain – almost torrential rain, and everyone had to come in, dripping all over the house. But it continued each year, and was always popular with everyone.

When the children left home, the Bramwells moved into Owlet End in The Close, and Mr. And Mrs. Rudge moved into the Lodge with their young children. After they left, a banking family moved in, but only stayed a short while. Then another family moved in - The Adam family, with their three young boys.