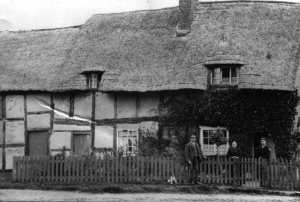 The occupants of No 2 Manor Cottages were the Salmon family – Head Gardener, William Salmon, commonly called Diggie. Diggie was born in the village and christened William, but because he was always digging in the garden when his friends wanted him to play, Diggie he became. He could barely remember his father, Thomas, a shepherd working on the Manor Farm. The only recollection of him was being told by him, “I am not Papa! You are to call me Father!” His mother, Mary Ann, lived at No 23 where Diggie spent his childhood. Round the corner, in the tall house in The Square, lived Ada Coldicott, and as Diggie matured into manhood, the friendship between them became serious. Ada was working as maid to the owners of the tall, large house on the corner of Scholars Lane and Rother Street. Diggie was working as gardener at Clopton House for Sir Arthur Hodgson. 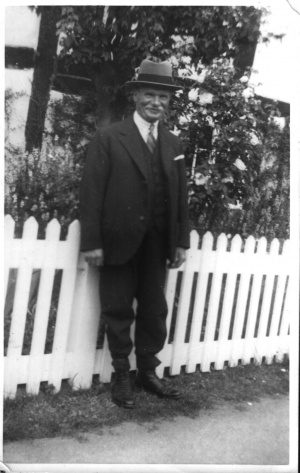 On Diggie’s marriage to Ada, he was given the position of Head Gardener at the Manor with, I think, a wage of 22/-d (£1.10) a week. No 2 Manor Cottages came with the job! In the back garden of this cottage were the Manor greenhouses and Diggie had full responsibility of looking after Mrs. Rees-Mogg’s cherished peach trees growing there. There were about 7/9 gardeners under him, who had to report to him at 7.00am every working morning for orders. When Mrs. Rees-Mogg was in residence, Diggie was always summoned to her room every morning, his muddy boots having been scraped clean and wiped with a damp cloth before he dared to set foot in the house. His hands, of course, had to be scrupulously clean. There he stood, cap in hand, just inside the door to answer her questions on the work for that day. Once, when she was suffering from a bad cold, he had to stand, deeply embarrassed, just inside her bedroom while she gave him suggested garden improvements from her bed in her nightie!

I have seen a photo of lawn mowing being done at The Manor during that time, with the pony’s hoofs covered with cloths so no mark would be left on the grass. Len Salmon, Diggie’s son, as a lad helped his father in the Manor gardens using a huge motor mower which, to me, looked extremely heavy to handle but was the newest invention in those days. 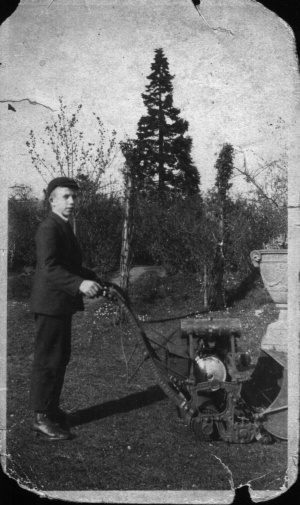 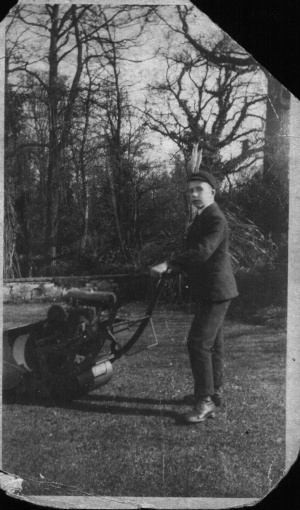 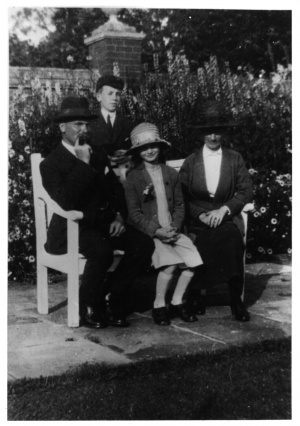 Len and Kath Salmon were both born at this cottage, and their births did not help Ada’s health at all. She was anaemic and at times, very weak and susceptible to colds. The only time Kath could remember her mother with any colour in her face, was when she had a violent row with her mother, who was then living at No 13. There was a mighty slam of the door and Ada was seen by her little daughter flouncing down the village street with bright red cheeks!

During the First World War, Diggie was sent to Gallipoli 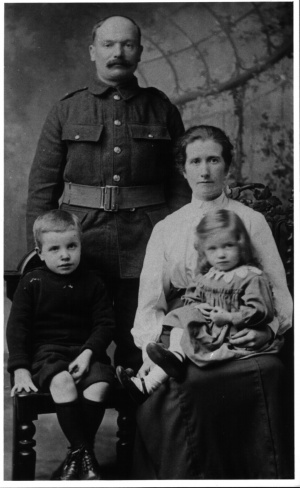 He hardly ever spoke of his time there, but the journey back home after the War through a part of Russia, played on his mind for the rest of his life. Here he saw signs of the Russian revolution and, for the first time, saw corpses of women and children. What he did talk about constantly, was the fact that, when he left the village in his army uiniform, his mother was sitting on Ada’s rocking chair by the living room window, waving to him; and when he came back almost 3 years later, there she was, still sitting there – and waving!

Ada died in 1923. Len was 13 and Kath was 7. Len, attending KES having won a scholarship there, had to leave school. Money was tight and Diggie wanted him earning a wage. Kath, at the age of 7, was left doing the housework as soon as she came back from school Like Len, she attended the village school under Miss Wilding, and like him, also won a scholarship - to the girls’ grammar school, Kings High, Warwick, cycling to town every day to catch a train to Warwick.

Diggie was not trained in gardening or botany, or in landscaping. Charlie Hebborn was – not to a great degree, but he seemed to have better knowledge than Diggie. Mrs. Rees-Mogg had come across Charlie on one of her many journeys and very soon Diggie was replaced. He was heartbroken. He was sent to work for Miss Weldon at The Lodge.

One of Diggie's comforters was his red setter – a beautiful animal whom he adored and chatted to constantly when he was alone. Now that he was working at The Lodge instead of The Manor, those living along the village street saw this dog often, tearing along the street from Manor Cottage to The Lodge. But when he came to the heavy iron gates of The Lodge, the dog would stop. Then standing on his hind legs, he would press hard on the gates which would then open just wide enough for him to squeeze through.

Diggie had a dog whistle which, of course, no-one heard except the dog himself who was listening out for it from when Diggie went to work. When Diggie thought it was safe enough and no-one was around in The Lodge garden, he would blow the whistle – and within a few minutes there was his dog by his side and looking up at him with trusting and loving eyes, wagging his tail. And Diggie was then happy to go on with his work there .

One of Diggie’s jobs with Mrs. Rees-Mogg was to assist in planting the may trees along the village street; also the poplars that used to grow in the Rec, and the avenue of oak trees along the back of the allotments.

When Mrs. Rees-Mogg decided to retire him, there was further heartbreak. He had to leave No 2 with all its memories and go, with his daughter, to live in one of the bungalows at the end of The Nashes. He hated it there, and was very lonely. He would spend the mornings on his allotment, mostly sitting on a step leading up to a barn nearby, and chatting to the other allotment holders. When they picked up their spades and went home, Diggie would then walk to the War Memorial and sit on the steps, just so that he could see people and chat to them. When I arrived in the village, Miss Bullock was occupying No 2 – and my goodness, didn’t she keep that brass doorknob and letter box sparkling bright. She was a very active lady, even willing to serve on the W.I. Committee and holding W.I.committee meetings in her tiny living room. After her death, various tenants moved in - and out – in fairly quick succession. The brass knob and letter box on the front door slowly became black – only to disappear altogether, with the door, when the Conways bought both cottages and completely renovated both. The greenhouses that once housed peach trees remained. The jacuzzi is in one of them!

It is interesting to note that, at the end of the 1800’s, the whole building consisted of one house and barn – the house part being the section nearest to the Manor that eventually became No 2.