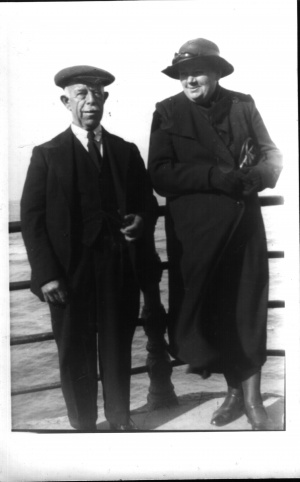 Mr. and Mrs. Charlie Sylvester lived at No 20. Mrs. Charlie was a big-built woman with a round cheerful face, a small turned-up nose and dark hair that always sprang back into tight curls whenever it was drenched by the rain. All that can be remembered of Mr. Charlie Sylvester was his dirty-grey thick moustache – and his hum! Evidently he liked to hum as he worked, and potted around “and”, said Betty Harris, “he had quite a good hum!”

“You’ll never walk in those shoes!” he laughed as he met young Betty (then Bailey) as she left a jumble sale. Betty had just bought her first pair of high-heeled shoes and was wobbling along the street in them. “You couldn’t even do leap-frog with me in them!” 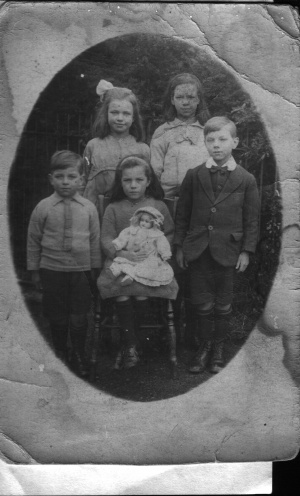 Tragically, three of their children died while still young. One of their sons, Wilfred, was killed on the road. His car had developed engine trouble and he had stopped the car and got out to investigate. He was lying under the vehicle when another car hit him. Eva, one of their daughters who had married a Mr. Clark, died in childbirth though her daughter, Pam, survived. Gladys, another daughter, married to a Mr. Few, also never reached old age. She and her husband were childless and Pam finished up in their home and, after Gladys’ death, went to live with Mr. Few in Porlock, Devon.

Wilfred’s tragic death affected Mrs. Charlie terribly. She never could hear the hymn “The day Thou gavest” without crying, and rather than break down in Church, she would must walk out of the door when the hymn was announced.

Mrs. Charlie, each year, would open her garden for the village children’s May Day celebrations (as mentioned earlier). All the children sat round the ancient wooden trestle tables that are still kept somewhere in our Hall. Altogether, there were about 90 children sitting round these tables. “However,” I exclaimed to Kath Radbourne who had told me this, “did Mrs. Charlie Sylvester manage to get 90 children sitting round trestle tables in her little pocket-handkerchief of a garden?" “Ah”, said Kath, “in those days, her garden stretched all along the tall brick wall belonging to the Lodge’s vegetable garden, right to the end where No 33’s garden started. The brick wall was one side of her garden, and the bottom of the gardens belonging to Nos 24 to 27 were the other side. They could easily get five or six trestle tables along there!”

Mrs. Charlie loved children and was always willing to work with and for the children in the village and the Church. She had odd little expressions; such as always referring to Birmingham as ‘Burnigam’, and the odd bits of washing she did during the week, she referred to as a ‘dab-wash, with the items, once they were on the clothes line, as ‘water-sweet’!

Photo: Village Family: Sylvester Family: Trixie & Bibby Sylvester and Trixie Sylvester Mrs. Charlie was, for many years, a widow, and when she died, her son Jack, (Francis John) and his wife Jessy moved in 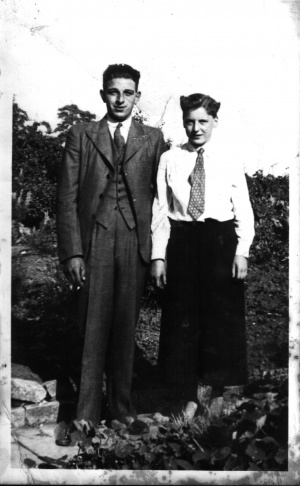 As the name Sylvester has been associated with Clifford since 1266, and probably before (spelt Silvestre!), it was good that Jack and Jessy kept the family name going by eventually having a son, Anthony! Jack and Jessy had met just before the 2nd World War. Jack was soon called up to the Army, so Jessy found herself Mrs. Jack Sylvester at the age of 18! During the War, Jessy lived with her parents-in-law, but after the War, she and Jack moved to No 33, next door to Phoebe Radbourne. The two ladies just did not get on well with each other at all, so there was probably considerable relief from both of them when Jack and Jessy were able to move back into No 20.

Jack, having spent all of his working life, until the War, with horses and astride horses as a groom at the Manor, spent the rest of his life walking a ‘jockey-walk’! 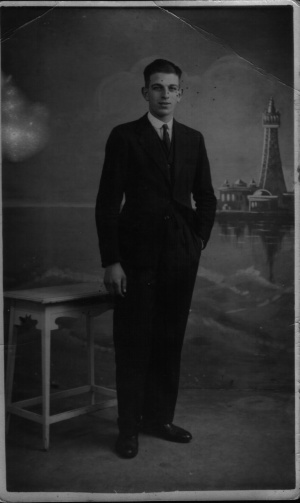 A tall, good-looking man, Jessy was convinced all the women he met would be attracted to him, and she became suspicious every time she spent an evening on her own! Unfortunately, two girls employed by Major Pagan Taylor to work as housemaids at The Manor, spent their evenings at the Pub – which was where Jack sometimes spent his evenings! The men who collected at the Pub for their social time each evening, had a name for these two girls, which was not at all complimentary to them! (They evidently flirted with every man they chatted to!) When Jessy got to hear about their presence at the Pub, her rage was furious when she realised her husband was there also.

Then Jack became ill, He was already low in spirits at the loss of his sister Trixie. Trixie lived only three doors away throughout the majority of their respective married years, and brother and sister were very close. Trixie’s death plunged him into grief. When his illness became worse, Jessy no longer worried over her suspicious. They were unimportant to the life of the man she was losing through illness. Despite the fact that the two were separated by many miles between here and hospital, they became very close.

During her last few years, she moved into one of the Charity Houses and that house too, she kept spotlessly clean! No 20 was sold to a property developer who, it seemed, took the inside of the house out, and re-made it! Since Jessy’s death, there have been many owners of No 20.