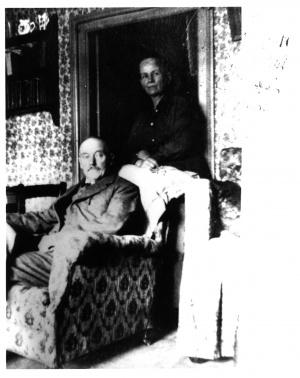 Daisy’s face had beautiful bone structure. She had lovely eyes and a full-lipped mouth – in fact model looks – and from her photo, it looks as if she was slim and tall! Unfortunately, throughout her years there, she was known as Mrs. Pickles Salmon, and no-one seemed to know why! As her husband also had that nickname, it might have been he that was good at pickling! His grandson, Thomas William Salmon (named after his Grandad) could remember the delicious rhubarb and parsnip wine his Grandad used to make from the produce grown on his allotment. One of his excitements when visiting his Grandad (round about 1923/5) was having a tot of the homemade wine in a glass and Grandad getting the poker hot in the fire, to warm up the wine! On the other hand, maybe Daisy was the one excellent at pickling!

William and Daisy had three children, Alfred, (born in 1885) Frederick and Elizabeth, known as Tot. As mentioned before, Mr. Pickles Salmon was in charge of the coal club 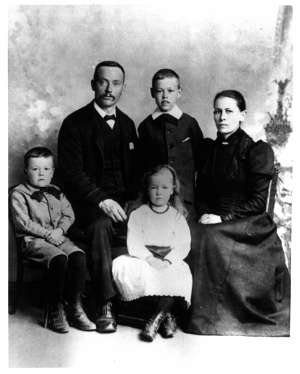 Frederick, their youngest son, had health problems, and as he grew to the age of leaving school, William and Daisy realised he would never be well enough to hold down a job. So, they turned their living room at No 21 into a sweet shop. This would give Frederick a chance of a living, and also give him some self-esteem. A man who was too ill to work was not looked well on. He would have no chance of having a home of his own or supporting a family. Prospects were very low for those who were disabled in some way or another.

Frederick ran the shop once he left school at the age of 13/14, and probably made a successful business with it, for there were many children in the village then. In fact, one year, the village school recorded 90 children on its register!

In his early 20’s Frederick died. I have a vague recollection of being told he had a weak chest and consequently had breathing problems, in which case just a simple cold could have killed him. Understandably, William and Daisy closed the shop, and the front room eventually became their living room again. The sweet shop held too many bitter memories for them.

By the time 1935 arrived, the Baileys were living in No 21. John Henry Bailey (always called Jack) and Lillian Elsie, his wife who preferred her second name, had been living for a while at Welford next to the Church. In fact, to get to their cottage from the road, they had to walk into the Churchyard! Jack had a little dairy business there, but once he arrived at Clifford, he worked at anything going, from gardening to haymaking. He was a thin and wiry man. Elsie, on the other hand, was big, well-built and on the plump side, and with a plump cheerful face. Their two oldest children, John and Betty, were born at Welford, and John quite amused his family over his concern for the graves in Welford Churchyard. If he saw any without flowers, he would take some of his mother’s loaves of bread, and put them on the graves!

Jack and Elsie, every Sunday, twice a day, would walk together to the Church, enter together; then they would part! Elsie would sit with the Misses Padbury in the back seat. Jack would sit opposite the door, and his children teased him terribly, accusing him of being attracted to that seat because a lady ‘dripping with jewels’ also sat on that seat! After the evening service during the light evenings, Jack and Elsie, with the children, would walk to Winnipeg to gaze at Jack’s vegetables on his allotment, then fondle George Robbins’ horses in Cokum Glory. (Winnipeg was the Stratford side of the farm road leading to the Stanley’s farm at Milcote fronting the main road, and Cokum Glory, the field the opposite side which stretched along the Welford Road.) Jack did not get on with the Misses Padbury. They were his wife’s relatives! Often their back door would open and Lizzie Padbury’s voice could be heard calling “Elsie! Elsie!” “She isn’t here.” Jack would shout back snappily. “What do you want?” “Have you any coal or sticks?” would come Lizzie’s reply. “No I haven’t” Jack would promptly reply, and shut the door on her!

Elsie was very fond of Keith Robbins who lived two doors away. Keith often came home when his family didn’t expect him to, to find the door locked. And Keith was always hungry. So Bay, as Keith called her, would often give him snacks to keep his going.