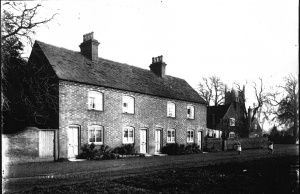 Lizzie Bennett lived with her invalid father, Steve, in No 22, a very quiet woman with a tender heart to those who were weak. She nursed her father, whose last years of his life were spent in a wheelchair; devoting all her time to him. Her only sister had married and left home to live in Stratford, but as she had two small boys to look after, there was little she could do to help. Perhaps that was just as well, as her idea of cleanliness wasn’t Lizzie’s! In fact, it wasn’t the general idea of cleanliness for most people! The best way to describe her way of living, was ‘gypsy-like’!

However, Horace Evans came to Lizzie’s rescue. He was extremely tall to Lizzie’s small height, but he was quiet like her, and once married, they made an ideal couple. The wedding was quiet, with Betty Bailey (later Harris) in pink, and Horace’s niece in blue, as bridesmaids.

Horace worked first at Hunters, the grocers in Stratford. Then he took a job in the Sorting Office of the Post Office in Sheep Street, starting work at 4.00am. His walk was amazing! It was so swift that he’s be gone in a flash! No-one could keep up with him. Early on in his marriage, he had had to have an operation on one leg, which left him unable to bend at the knee. To see this man limping to work and back at break-neck-walking speed, left people gasping. He kept that limp – and walking-speed – to the day he died.

He was an absolute gentleman, never letting one swear word pass his lips. However, when frustrated or drunk, he would address every irritating object or person as “busted” – but that was the only limit he went to in his stress.

He had a strange way of blowing out his cheeks as he sat with his mug in his hand, and no-one knew if it was chronic indigestion or an expression of pain from his lame leg. He loved his drink – he usually finished up with far too much of it inside him! Jack Bailey usually escorted him home – a rather difficult job to do considering Horace’s enormous height towered over Jack’s little frame, but somehow Horace managed to get to his doorstep upright. “Goodnight Horace,” Jack would say each night, but Horace never managed to answer it, for Lizzie would straightway open the door as if she had spent the last half-hour standing inside with her hand on the doorknob. In front of Jack’s gaze, Horace would ‘disappear’, falling flat on his face inside his front room with his feet still on the doorstep. Any “Goodnight” he might have said to Jack, was said to his front room carpet as he lay on the floor, with the front door shut tight by Lizzie’s small but firm hand!

Horace’s early morning walk to work each morning always took him through Holy Trinity Churchyard. When Olive Bennett was murdered there and thrown into the river weighed down with a gravestone, Lizzie went beserk! This was not over the murder, but over the fact that the police made not one, but two visits to her house! The shame of having two policeman call at her house was enough to bear, but to have them twice! They had actually come, as they hoped Horace might have witnessed something in his early morning walk through the Churchyard.

Lizzie wasn’t a scolding wife. Just a very gentle woman. Distressed over her sister’s lack of hygiene, she would collect all the dirty washing she could find in her sister’s house, and bring it home to wash each week. Horace did not approve at all, once he found out. Lizzie didn’t argue. She just stayed quiet. But the washing carried on, with Elsie Bailey, next door, hiding it in her house until Horace had left. Then Lizzie would collect it and spend the morning washing – by hand of course – all her sister’s dirty laundry.

Her two nephews also benefited from their Auntie Lizzie’s kindness. Ted, the oldest boy, had met an Italian girl during the War, brought her back and married her. But the poor lass, as well as being unable to speak English, also had heart trouble, and she died early on in their marriage. Ted’s second marriage was disastrous – practically from the day of the wedding! Auntie Lizzie’s love poured out to him, and his washing also finished up in Elsie Bailey’s kitchen until Horace left for work. Then that washing too was taken into Lizzie’s kitchen and another morning would be spent washing and ironing someone else’s laundry – for love!

Horace died in 1963 at the age of 60. Lizzie died in 1974. They had no children to care for them, and they rarely had relatives or friends call during their married life. The fourteen years Lizzie lived on her own must have been lonely – but it was her choice! She lived quietly, and she died quietly.