Darkie Mullis lived at No 24 at the beginning of last century. As he married and left soon after, I would assume he had been living there with his parents. He was known as the ‘killer of pigs’ – presumably taking on the unpleasant job of preparation for the ‘Boar’s head’ – an old family Christmas meal dating back to before the middle ages. The few who owned a pig in the village, brought the creature along to Darkie to perform his necessary deed, so the parts of the pig could then be salted down and stored away for use during the winter. Many of the old cottages in our village will have patches on their walls, usually near the floor, where paint will constantly flake away. That would be the area where the salted pig would be stored, with the salt slowly soaking into the brickwork.

No-one can really remember why he was called ‘Darkie’. In fact, no-one can remember his proper name! Nicknames ‘stick’!

At the back of No 23 was an outhouse which adjoined the rear garden of No 24. There were no boundary fences in those days dividing the gardens from each other, and the tenants were expected to share, in a community spirit, all they had with each other. So, Mrs. Mary Ann Salmon living as tenant at No 23, had to put up with Darkie Mullis killing all the villagers’ pigs in her outhouse. She also had to put up with the fact that one of her daughters, Sophie, was becoming rather attracted to Darkie, and spent time in the outhouse with him along with accompanying squeals from the pigs going to the slaughter! I never heard whether Mrs. Betteridge came along with her bowl to the outhouse to catch the blood, but she was certainly doing it when Darkie left The Square, and the pig killing was transferred to The Hollies.

Sophie was not liked by her brother (Diggie), or his family. I know little about her except for the Dreadful Thing she did – but more of that later. 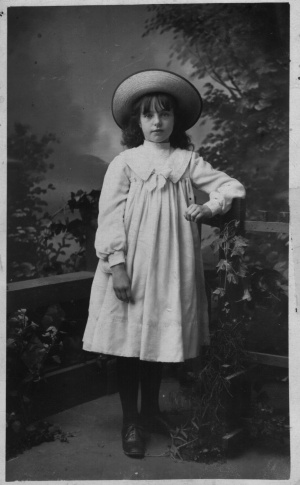 Sometime, and I’m not quite sure when, Jack and May Huckvale moved in. May was the oldest daughter of John and Fanny Salmon, who had the advantage of a beautiful skin, beautiful hair, and a beautiful nature. She kept all three, right up to her death – and she was in her 90’s then! 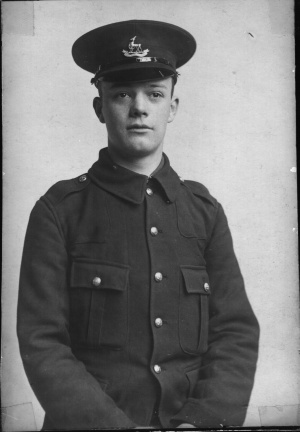 Jack was on the stocky side, a great singer, actor, and artist. His sketches were brilliant, both acting and drawing. The latter he accomplished during any still moments in his life. People can remember him making quick sketches of those around him while he waited his turn during airgun shooting matches, or darts. He was a keen member of the Church Choir, singing tenor.

Children came along; a son and then two daughters, so they moved out of their little cottage and moved into ‘Sunset’, the 3-storey house on the corner of The Nashes.

Then came 1951 and the Big Sale, when all the tenants’ cottages were sold – mainly to the tenants living in them. A Miss Dorothy Hush Woods bought No 24. She was a very quiet, small plumpish lady who, for some reason, was at the receiving end of the mischief cooked up by the young lads in the village. They delighted in banging on her door, then running away so they could watch, from a safe distance, Miss Woods standing on her doorstep brandishing her stick.

She attended Church regularly, always sitting in the same seat each time. A rather lonely lady, until Nanny Wise moved into No 39 and then, at last, she had a friend to invite in for tea, or cross over the road to have tea with Nanny. On her death in the mid 1960’s, her house was sold, and the new owner, a hairdresser, modernised it, later selling it to Roz King.

Roz brought laughter into The Square – and romance! Ken Whittam had come into her life while she was still living with, and working for, her parents on their farm. This was at Wilmcote and Roz’ speciality were the horses on the farm, and she continued working there after her marriage to Ken. Even when their daughter, Clare, was born, followed a year later by Tom their son, Roz was still very involved with the work at her father’s farm. Then Ken died very suddenly – and it was a long time before we heard Roz’ laughter in The Square. Romance eventually came again to Roz, but it was a slow romance, for grief takes a long time to heal. Mike and Roz’ wedding will always be remembered as the day when the bride was more concerned over her little son, than her marriage, for Tom chose the very day of his mother’s wedding to be terribly ill at the reception! A few years later, another little girl was born, Olivia, and the family began looking for a larger house. Their hope of finding a suitable house in the village was fulfilled when the large house by the Manor Gates came on the market, and they moved in, complete with dog, cat and numerous chickens, replacing the name of the house, ‘Norrys’ with the name ‘Palings’. But in No 24, came another Roz, and this Roz was just as full of laughter as the other Roz, but minus the chickens and one cat! Our present Roz is blessed with two dogs, Derek and Puzzle, and The Square is full of laughter once more.