Tom and Norah Radbourne moved to No.30 in their early married days. Norah had come to the village during the War as a Landgirl, and could tackle anything – even fat squealing pigs! The Radbournes at Rectory Farm needed help on the farm, and Norah worked for them, falling in love with Tom. Their sons, Stephen and Nigel were born there and spent their early years there.

(Nigel has given me a copy of the Stratford-upon-Avon Herald dated 27th February 1880 which mentions one of his ancestors:-

Thomas Dixon Sarson said: I live at Ryne Clifford. On the 21st inst. Prisoner was in my employ as labourer. I have lost several things at different times, and I found half-a-bushel of seed potatoes secreted in my cowshed, and in consequence I gave information to the police. On Sunday morning I noticed some footmarks from my field and examined them; they led to the cowshed. I compared the footmarks and placed a boot in them in company with Superintendent Rowley.

Superintendent Rowley said: On Saturday I received information from prosecutor that some potatoes had been secreted, and I went to Clifford on Sunday morning. Prosecutor and I examined the footmarks in his field to the building where the potatoes had been secreted. I found footprints to and from the building and Clifford. I then went to prisoner’s house, and went into a shed belonging to him, where I found the bag of potatoes I now produce. I told prisoner I should take them to Mr. Sarson, and he replied, “What for?” I said, “I believe these are a portion of Mr. Sarson’s potatoes.” Both prisoner and his wife said they had them from his father-in-law. After Mr. Sarson had identified the potatoes, I charged prisoner with stealing them, when he said he had had them in his possession twelve months. I had prisoner’s boots removed from his feet and in company with prosecutor and Sergeant Kendrick examined the footprints, and found them to correspond in every particular. I then locked prisoner up.

The Bench examined the samples of potatoes produced.
Henry Beasley said: I live at Clifford. Prisoner married my daughter. I have seen the potatoes produced. It is not true that prisoner had them from me, or any of the kind. I don’t know that I ever saw them before Monday morning, when they were shown to me.

Prisoner pleaded guilty and was sentenced to one month’s hard labour.”)

Tom and Norah loved to entertain and always, every New Years Eve, they invited the bellringers in after their midnight peal ringing the New Year in. It was always a rather noisy early morning party which lasted until about 3.00am.

When the Radbournes left and moved to No. 21, Miss Turner moved in, and after that there were a succession of owners, some of them well-known. Sir Ben Kingsley (then just known by the neighbours as Ben) and his wife Alison spent their early married years there. David Thelford (another well-known actor) also was owner for some while and one of his visitors from time to time was Peter Duncan of “Blue Peter”. My mother-in-law managed to grab him while he was walking across The Square and asked him to wait. A few minutes later, she came out with about six carrier bags full of discarded tinfoil, (Blue Peter were collecting it at that time). Peter Duncan graciously accepted the bags, and in return handed her a signed Blue Peter photograph. She never saw him again, though she was always looking out for him, but probably he decided to visit his friend at night-time to avoid his car being filled with carrier bags!

Charmian Evans was another owner and, of course Lawrence Salmon and family! 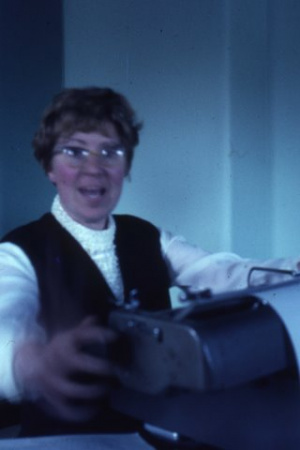 The ‘family’ came at the end, Lawrence in the middle and Avril (then Taylor) started it all at No. 30! She arrived in the village in March 1965 in a blizzard, with Warwick Road from Warwick to Stratford so full of hard-packed drifted snow, there was only room for one lane of traffic. The volunteers who had spent hours digging a road through the drifts, had dug out areas here and there, which her car could slide into, to enable cars coming from the other direction to pass by. She rented No. 37, and when she arrived with her furniture stuck out of the back window of her car, she was frozen. The cottage too was frozen, having been empty for a while. Dragging her furniture in and just leaving it there, she drove off to Stratford to buy a bag of coal. Although she could manage her furniture easily, the bag full of coal presented problems. She heaved and puffed to pull it out of her car, with no success.

Then help came. An elderly white-haired lady living opposite came across and, with the words, “Let me do that,” just picked up the bag, heaved it over her shoulder and calmly walked to the coal shed door. Avril was taken aback! Old ladies needed help across the road. Some of them had to be pushed around in wheelchairs. They certainly didn’t heave a coal bag around that a 20 something energetic woman couldn’t even get out of her car! Avril, concerned that this old lady might collapse any minute on the ground, shut her car door and ran after her. Unfortunately, she was the one to collapse, slipping on the snow and falling flat on her face. To add to her shame, the lady (whom Avril was beginning to think was a descendant of the Amazons), turned round and asked her if she was alright! And that was Avril’s first introduction to her future mother-in-law!

Lawrence, then living opposite, was an electrician, and was just what Avril needed to connect the night store heater she had just bought, and from then on their relationship slowly developed. It was still at the very slow development, when Avril purchased No. 30 and moved in. Two years later, the relationship between them was still at the very slow stage, so Avril decided to quicken it a bit. She encouraged Lawrence to go with her to Mickleton to swear an Affadivit to say he had never been married before! A few days later a Licence to Marry Without Banns, arrived. Avril then set the date, arranged things with the Vicar of Quinton as Clifford Church was going through an Interegnum, and told Lawrence she would be waiting at that Church at that date and time! There was an ultimatum with this information! If he didn’t turn up, she would go the next day to an Estate Agent, put the house on the market and move to Jamaica!

Two years later, their daughter was born at No. 30, but it was when they found out that baby No 2 was on the way, they realised they would have to say ‘goodbye’ to their one bedroomed cottage. Being the strange family they are, they moved on the very day their son was born, fortunately moving just round the corner to No. 14, with all their furniture, (plus little daughter sitting on their imitation leather swivel chair), packed onto Alec Reece’s trailer. Their strawberry barrel was the last to be taken. “I’ll just water it first,” declared Lawrence! It was 1976, the year of The Drought; the year of the ladybird, where every step you took you trod on at least 10! And the heat was unbearable! So, Lawrence decided to thoroughly soak his strawberry barrel making it four or five times heavier than it was! Both he and his friend John, lost many pounds of fat heaving that barrel on to the trailer, pushing it along the street, than heaving it off the other end. Avril, in the meantime, was lying in comfort on a reasonably comfortable bed in the maternity wing of the Warneford Hospital while her new-born son screamed!