No. 33 had a whole succession of tenants all through the last part of the 1800’s and into the first half of the 1900’s. Sometime after Will and Phoebe Radbourne moved next door, Jack and Jesse Sylvester moved in with their young family, but when Mrs. Charlie Sylvester died, (Jack’s Mum), they moved into her house round the corner No,. 20. This made No. 33 available for a young married couple, Dick and Pauline Ullyatt, and when, some years later, No. 9 became available for them, they moved out. No. 33 then became available for another young family, Eric and Margaret Greenway and their two young boys, Colin and Alan. When their youngest, Jeanette was born, Eric, with his building and carpentry qualifications, enlarged the property, but then an offer of a much larger house in The Nashes came up, and No. 33 was then sold to Win Baker.

Winifred Mary Baker was born in London, very much loved, cuddled and adored by her mother, and fussed over by many aunts, but when she was 8, those motherly loving arms were suddenly taken away, and in their place came a little motherless baby sister. No-one filled the empty place of a mother’s love in Win’s heart. No-one attempted to help or comfort her. All attention was focused on the grieving husband and the little new-born baby. Win threw all her love into mothering her little baby sister, but it was many years before her sister was able to give Win the love that she yearned for.

But Win survived! Girl Guides claimed her attention and she threw herself into camping and camp-fire songs, tracking and tying knots. Her love for the Girl Guide movement lasted all her life. I have, in my garage, one of her treasures from those times – her hurricane lamp used in her camping days. Win decided to devote her life to teaching, and applied to a Teachers Training College, but was alarmed, at the medical, to be told to visit her own Doctor! To her relief it was nothing life-threatening. An over-active thyroid (which was noticeable in her slightly protruding eyes) was giving her a rather excitable nature. The College refused her on those grounds. That didn’t daunt Win! She applied to another College and was accepted, and found herself eventually, in a teaching post in what was then Rhodesia. Some years later, her sister joined her, found love, married and settled there. It is quite possible that Win would have stayed there, for she loved the country and the people, but her father, back in England, was getting older and needed her.

It was when she and her father arrived at No 33, that we all got to know Win well. She threw herself into everything practically the moment she arrived, and soon the whole of the village knew of her existence. She took the position of Head Teacher at our village school, organised drama groups and acted in them; organised street parties, and involved everyone in everything (and 'everyone' means the whole of the Parish, including Milcote, Wincot, Willicote, and the bungalows in Shipston Road). “Of course you can do it!” she would say as soon as excuses stated. “I’m not taking ‘no’ for an answer. You’ll be excellent at doing it,” and would scurry away without hearing the reply. What is more, she made sure there was a written acount of the event in the Herald, and always pleaded for a photographer to come out. Some times she succeeded in the latter, and consequently, events in Clifford, plus photos, regularly appeared in the Herald.

No-one was missed out. She made sure of that. While we had a resident Rector, there was no problem, (though possibly she was around near at hand, to make sure that he didn't leave anyone out in acknowledgment and thanks). When there was an interregnum, and certainly once we came under the 'rectorship' of Welford, she made sure that, if no-one was around to gave a vote of thanks, then she would do it

One of the many words of advice she gave me was this, when she handed over to me the work of the children in the Church, “Avril, you must make sure that every child receives an attendance prize each year – even if their attendance is only one Sunday in the whole of the year. They must have a prize for that one day, for it is not their fault that they didn't attend,. They all all keen and love coming. On no account must they receive any form of punishment when it is the parents' fault.”

She always made sure that, whenever anyone retired from their voluntary work in the Parish, they would have a public presentation of a gift of thanks, however small that service was. And she emphasized that it had to be a public recognition, not just a small 'thank you' in a little group with no-one in the Parish knowing. 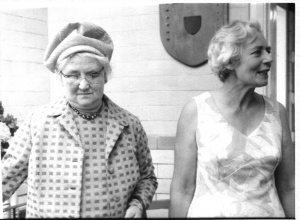 The school children loved her – to begin with, until they came up against her firmness and discipline.! There was always a loving nature in Win; one that cared, sympathised and encouraged, but always with her was the emptiness – the longing for love; perhaps not the love that was snatched away from her when she was a little girl, but a love that cared for her, and about her. Coupled with that was her disappointment that she had to leave Rhodesia (soon to be named Zimbabwe) - the country which she loved so much and where the people she loved - her little sister (now a mother) and her many, many friends - all lived. There were times, here in Clifford, when she became snappy. Her father received a lot of the snappiness. When he died, a few of us received the sharp edge of her tongue. But Win always repented, and would make an extra effort to say ‘sorry’.

She found her faith in ‘Our Father which art in Heaven’ difficult. Her relationship with her father was never good, with little trust, and although she attended Church regularly and instructed the children in her care on God’s goodness, her faith wavered from time to time. At its worst, depression sunk in – and it took a long time to go. She threw herself even more into work, and into the Girl Guide movement, starting a Girl Guide Company here, and later, when that folded up, she became a District Commissioner.

Even in her depression, she was still able to concentrate on others from time to time. On her retirement from teaching, she also gave up her Sunday School work, and I took this over, with Christine Wheeler; both of us a poor replacement for Win. The encouragement I had from her was a tremendous help to me, and she was always willing to help at times when I needed it. She threw herself into campaigning and writing letters for Amnesty International, and when she could, would spend months in Zimbabwe with her sister.

Then her depression became worse. News of a tragic death of a great friend of hers plunged her into deep depression. This was followed by the death of her sister. Both deaths took place in Zimbabwe and she felt so far away from those she loved who were needing her. She found it difficult to lift up her head, and her face no longer was lit by her happy smile. Her loneliness was great. Her grief was terrible, and we were unable to help her.

Then children were born at No 34, and she suddenly found herself treated as a grandmother. This perked her up quite a bit, but the depression never really left her, and diabetes had set in now.

She moved out of No 33 and into one of the bungalows in Barn Close. Her death was very sudden. So many of us were praying for her – had been praying for her for many years - so I know, that in death, she found the love she so desperately yearned for all her life. What hurts me now is, that there is no public record easy to be seen – not even a gravestone – to show that Win Baker ever lived and worked in this Parish. Once the memories are gone, there will be no-one to remember her, and nothing to remind the interested of how she put her soul into every part of life in this Parish.

What hurts me now is, that there is no public record easy to be seen – not even a gravestone – to show that Win Baker ever lived and worked in this Parish. Once the memories are gone, there will be no-one to remember her, and nothing to remind the interested of how she put her soul into every part of life in this Parish.

Avril's request is for a circular bench in the Village Hall front Garden round the tree there - as a memorial to Win Baker who spent all her years here devoted to keeping the whole of the Parish together as a vibrant community. 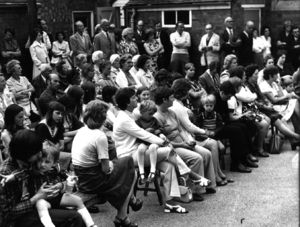