I had to leave out one family when I originally wrote in the Parish Magazine in the 1980’s. This was the Radbourne family at No. 34. Kath Radbourne, who gave me all the information, was so insistent that I should never mention her name; and how could I talk about her family and leave her out!

Kath told me once that she wasn’t actually born in the village. I think she said she was born at Milcote, but I could be wrong. She came with her family to live first at No. 33 in The Square, and then later moving into the larger house next door. Her parents’ names were Will and Phoebe, and her brothers Jesse (always called Bill) Jack and Den. Den was always regarded as one of the family, but he was actually Kath’s cousin. The Stratford-upon-Avon Herald of 14th December 1917 makes it clearer:-
“In ever loving memory of our dear sister-in-law Rosa Beesley who passed away December 12th 1916. Never forgotten by Jesse, Fred, Will and Phoebe.
In ever loving memory of Rosa, the dearly loved wife of Sapper J. Beesley of Clifford Chambers who passed away December 12th l916. Sadly missed by Joe and little Dennis.”

So Phoebe took her little nephew into her home and made him part of her family. He was a good deal younger than the others, and Kath confessed once – when I talked to her about her amazing patience – how impatient she was when, as a young girl, she had to stay in and read stories to Den and sing him songs to get him to sleep, while all her friends were out playing, and Den took a long time getting to sleep!

Will was a fine tenor in the church choir, sitting with the organ behind him and competing with the basses opposite. It was a privilege to sing in the choir in those days, and there was even a waiting list! Dennis joined the choir when he was old enough and was a shocker at making the choir ladies laugh during the service. If anything slightly amusing happened at a service, he would make a face at the girls. Then instantly he would stare woodenly ahead as if he had never twitched so much as a muscle, while the girls would be suppressing giggles and snorts.

Phoebe worked in the school, cleaning it thoroughly after the children had gone home. She also cleaned the Church and on her death, Kath carried on with the Church cleaning. Kath was very much like her mother in looks; a kindly patient face framed with beautiful wispy hair that just would not be pinned down with hair pins. Kath also, like her mother, developed the same back trouble which caused both of them, at a certain age, to walk with a stoop becoming more pronounced as they became older

The Radbournes and the Village Sports

The whole Radbourne family loved sport. While the village cricket team played cricket in the field across the river, Kath and her mother, together with other helpers, served the teas. The water was heated in the Radbourne’s copper and then taken round to the cricket field via the bridge by the Manor Mill; a long way to haul the tea urn, cups, beakers and eats! Stan Hastie and Vic Radbourne made a raft out of oil drums, and the tea was put on the raft at the bottom of the Radbourne’s garden and pushed across the river.

It seems amazing to me that we had an extremely good cricket pitch in that field. It was mown regularly, rolled with a roller requiring eight men to pull and push it. The precious square of turf was fenced off to keep the cattle off, and during the dry season, the fire engine from the Manor kept it well watered. Benches were placed near the river around the pitch and were all occupied each cricket match, with most of the village turning up to see it. A pavilion was erected, and later transferred, along with the equipment and roller, across the bridge, along the main village street, to the field by the New Inn. By this time, only a small percentage of the team were from Clifford. The majority came from outside the village.

Then came The End! “Sorry,” said Warwickshire County Council, “we are going to cut a road right through your cricket pitch. Hard luck!” And they did! And that was the end of the cricket pitch! The team carried on playing for a while at Long Marston, and I believe the large roller finished up there.

The football field, at the beginning of last Century was somewhere near Cold Comfort Farm, and then was transferred to the meadow near the Manor weir. Kath loved football, and even more, - cricket! Her living room was full of photos of the football and cricket teams.. She carried on going to the football matches when her brothers gave up. Jesse married and moved to Welford. Jack eventually took up the responsibilities of landlord at the New Inn.

Dennis died very tragically. He was Verger/Stoker at the Church and on the morning of the memorial service to King George VI in February 1952, he visited the Church on his way to work. He wanted to make sure that the Church would be warm enough for the evening service, and that meant stoking the furnace with plenty of coke to last the day. His family believed he had gone straight on to work after visiting the Church, and his firm never contacted the family to say he hadn’t arrived. On lifting the trap door leading down to the basement, Dennis was hit by poisonous fumes. It was sometime before the Rector, Canon Brookes entered the Church and by that time it was too late. The family went into shock – as did all the village, but it had a terrible effect on Kath’s life. Within a short space of time, from being a happy family with her parents and younger brother, Kath was left on her own. Her mother died soon after Dennis. Her father had died a while before 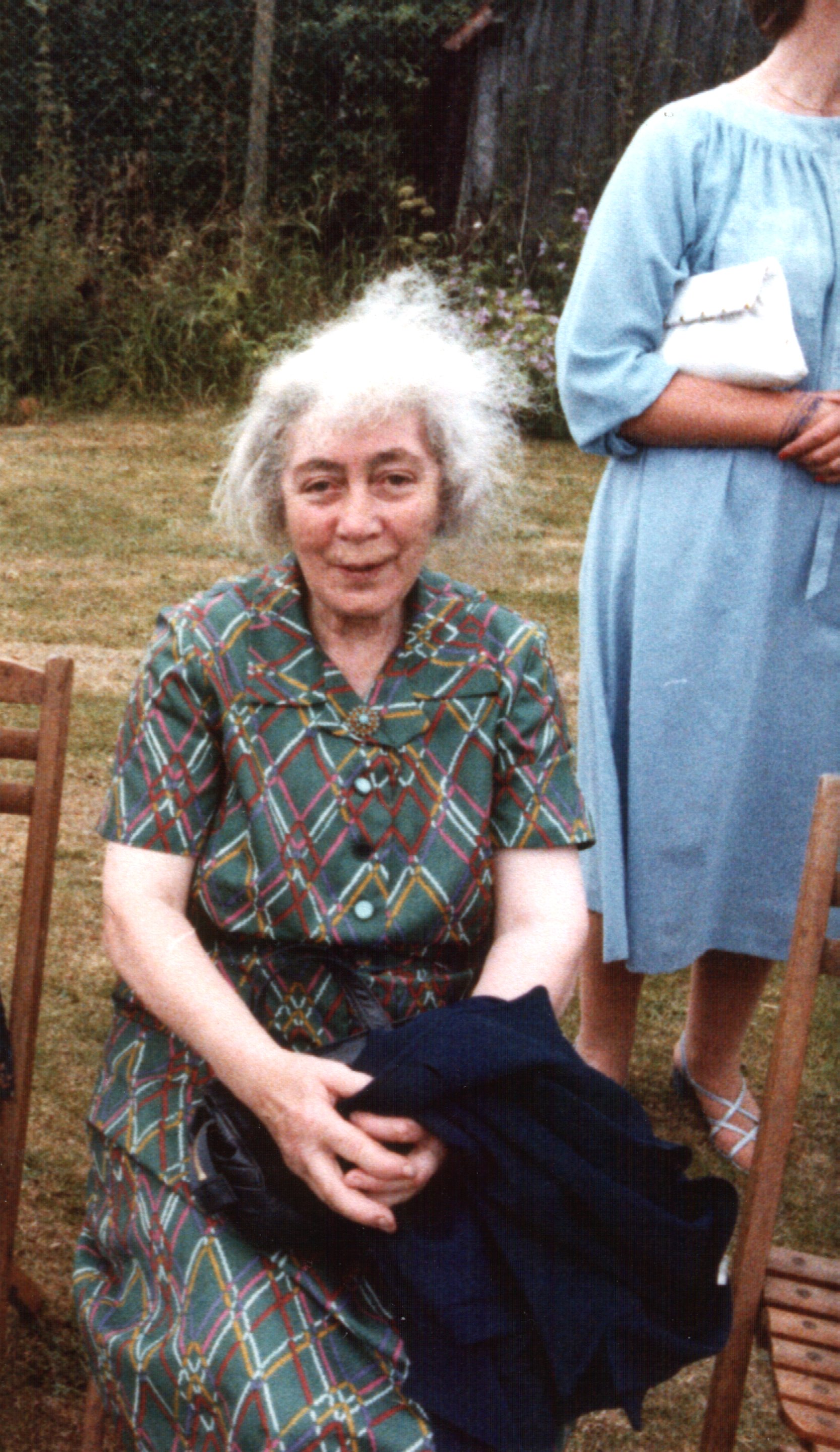 Eventually, after a time, and now alone, Kath started attending the football again. She was attending the games when I came to the village in the late 1960's. By this time the football team was the junior one organised by John Griffiths, but Kath was still there, on the touch line, ready to cheer her team.

Her greatest love was the Church. Her whole life centred round it and her daily life was full of prayer. Not only did she thoroughly clean the Church (“Our Church,” announced Mrs. Leonard-Williams when I first came to the village, “doesn’t even know what a spider or cobweb looks like; we have such an efficient cleaner.”) She spent hours clipping the overgrown grass in the back of our Churchyard. John and Maisie Wilks seeing her struggle against the never-ending weeds, volunteered to tidy the Churchyard. It took a load of work off Kath’s shoulders, and was a joy to see.

Kath never criticised – always praised. Yet, when she felt that wrong had been done or said, she quietly but firmly stated so. She found something good in everyone; even those for whom it was hard to find anything good at all! Her memory was fantastic and the way she talked to me about the village in her childhood, was like painting a picture. She loved, and was loved in return. “We have a saint living in our village”, I was told when I first moved here, and when I met Kath, I knew what they meant

I don’t know why I talk about Kath in the past tense. She is so much alive now. Jesus said, “Everyone who makes himself great will be humbled, and everyone who humbles himself will be made great.”

Kath is surely “one of the greatest” in heaven now!.

From the Parish Magazine September 1988:


The death of Miss Kathleen Radbourne left not only a large void in the Church, but also in our village life. Kath was always there. The Church was her life. Not only did she lovingly look after and clean the Church and it’s brasses and cloths, she was a bellringer for over 60 years, and she very rarely missed a service. It will be very strange not seeing her in her usual pew on Sundays

Kath was a true villager, joining in it’s many activities; the Mothers’ Union, W.I., 60 Club etc., or on the touch-line in all weathers supporting the village football team; and she was an ardent Villa fan! In fact she loved all sports. Having lived in the village all her life, she had a wealth of stories of the village both past and present. Kath epitomised she meaning of a true Christian. She was loved and respected by young and old alike and she will be greatly missed. A muffled peal was rung in her memory.