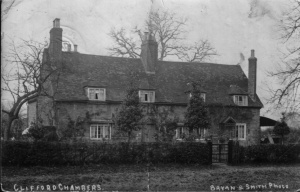 The Hollies was a hive of activity. It was a carpenters, decorators, wheelwrights, undertakers, dairy, pig and poultry keepers, bee keepers and plum and apple growers!

Martin Bailey lived in one section of The Hollies with some of his family – his whole family consisted of seven girls and four boys. His wife, Hannah died suddenly and he was left to bring up his two younger boys, Len and Frank. The older son, Jack, lived with his wife in the other part.

Jack was responsible for the dairy part, bringing his cows along the village street every day from Rectory Meadow to the cow pens in the present orchard for milking. The poultry, you will be glad to know, were very much free range, roaming everywhere amongst the trees in the orchard, their eggs, along with those of Mrs. Betteridge, supplying people from the village and as far away as Birmingham! The bees were kept in straw hives one side of the house.

The other side of the house was the carpenter’s side. A broad path led up to the workshop, wide enough to take the cows and stacks of wood piled up high to one side of it. Everyone had to walk past the wood-pit - the cows, plus villagers. The villagers could be carrying anything from jugs for milk from the dairy, and broken furniture for mending. The wood-pit was an awesome sight – a pit deep enough to take a man. The trunk of a tree would be laid over it. One man would be in the wood-pit and the other astride the trunk, both sawing the trunk into suitable sizes

The workshop attached to the side of the house, had huge double doors that were open most working days, and the men could be seen easily from the village street, toiling in sweat and shirt sleeves. Old accounts show that the entire cost of a funeral was £5, and that repairing and whitewashing a privy cost 1/6d. Records show the Baileys travelled as far as Malvern to do carpentry. A lot of the work was local, transport being provided by Dolly the pony and the dray which had lettered on it, the name of the family.

When a funeral occurred, all work stopped for the coffin to be made. Large kettles were put on the boil in order to assist in the shaping of the coffin, and a black pot containing the lovely aroma of boiling pitch was always at the ready. The final touch was the polishing, lining and the placing of the brass handles. It was considered a great honour to assist in carrying the coffin to the Church – and they were carried for some distance in some cases, people placing trestles along the road at various intervals so the coffin bearers could have a rest. 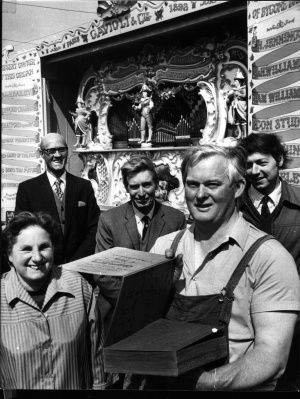 The inside of the house wasn’t quite so cosy as it is now. For a start, water came from the pump outside; salted meat hung from the beams in the living room; a big black cooking range with jacks and spits filled quite an area with a separate brick bake oven, and there was a huge cast iron copper in an outhouse. Upstairs was rather cosy. John Bailey could remember his grandfather, Martin’s four poster bed with canopy and curtains. He could also remember seeing in the house a reed organ, concertina, flutes, trumpets and clarinets, so it would seem that the Bailey family helped provide music at the Church at one time. It is interesting to note that Thomas Hardy in one of his books, mentions the village carolling with flutes; so I would imagine the same happened in our village.

The Bailey boys and girls could vividly remember a delightful June day each year when the Clifford Wake came with amusements and roundabouts on the village green – evidently stopped by Mrs. Douty when she came to the village. Living rather close to the village green, the Bailey children would linger behind after the show closed down to have some forbidden rides on the roundabouts until they were caught and chased off.

The Killing of the Pig

John Bailey could remember a pig killing at The Hollies which was such a part of life then that no-one regarded it as anything special. To read it now produces shudders in me, but I will tell you, in case you are not quite so sensitive as me. To quote John:-
“Your mention of Mrs. Betteridge living opposite, brought back vivid memories for me of Mrs. Betteridge in her white bonnet, large apron and white cuffs when a pig was being killed at The Hollies. I recall it being man-handled onto the pig-killing bench to have its throat cut, squealing, and when this was done, Mrs. Betteridge, with a large basin, caught the blood. Someone else raised and lowered the uppermost front foot of the pig to help pump the last drop of blood out of the pig.”

He added, in case anyone might be thinking of Frankenstein, that Mrs. Betteridge only wanted the blood to make black pigs pudding! There is rather a sad ending to the story of The Hollies. Martin died at quite a young age, and Len and Frank carried on living there looked after by sister Alice. By the time the last of the boys married in 1946, The Hollies was in a rundown and neglected state. It was left to Mr. Dingley to restore it as it is today.

The Last Baileys at The Hollies

There is rather a sad ending to the story of The Hollies. Martin died at quite a young age, and Len and Frank carried on living there looked after by sister Alice. By the time the last of the boys married in 1946, The Hollies was in a rundown and neglected state. It was left to Mr. Dingley to restore it as it is today.