Back to Village Life 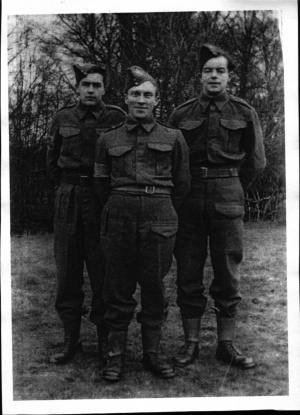 War Years as a child in Clifford Chambers (Maisie Wilkes)

The war did not really affect us children although we were surrounded by airfields and army camps. There were always plenty of men around in uniform and conveys, but no trouble. The Americans used to bring washing down The Nashes to the bungalow where a Mrs. Batchelor did their laundry. We used to stand at the top of The Nashes asking, “Got a gum chum?” and they always gave us candy bars which eked out sweet rations (most of the sweets being Horlicks and Ovaltine tablets).

Food always seemed plentiful as everyone more or less kept a pig and chickens, and the men used to shoot rabbits and pigeons, which made a big difference. I remember my brother and I cutting up great blocks of salt and crushing it, ready to salt down a pig. Berries were collected and used so, in the country, we did not feel the pinch as those living in towns and cities.

In school holidays we helped gather the harvest and we used to have a week or two weeks in October to gather potatoes. I remember two planes crashing at Atherstone; one behind the bungalows along the Shipston Road being on fire, and one which limped back to base, but over-ran the runway and straddled the Shipston Road. We saw the glow of the Coventry blitz.

On the farm we had the landgirls plus The Lodge boys, and Italian prisoners of war. These P.o.W’s wove beautiful wool into leather belts, and carved toys out of wood. We also had evacuees in the village who came to our school.

We had concerts in The Jubilee Hall to raise money for the Forces Fund, and we also went round the village collecting unwanted books which were parcelled up and sent to The Soldiers, Sailors and Airforce Funds. The W.I. members knitted socks for them as well.

On looking back, the war years were more fun for the children thanks perhaps to the grown-ups. We did not have material things as the children have today, but we did have the wide open fields – and security. Even with all the forces and P.o.W’s and The Lodge boys, we were always safe.

From the Stratford-upon-Avon Herald - 28th February 1941